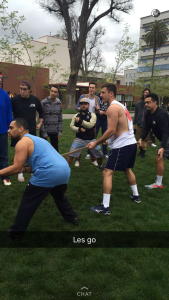 Yesterday the brothers of Delta Upsilon competed in Kappa Deltas Shamrock Philanthropy which brought the whole greek community together. The event was one out of four things that happened this week. The event I’ll be focusing on today was a competition between groups of four greek establishments and consisted of five parts; three legged race, egg toss, tug a war, joke contest, and the elephant march. We almost had the full brotherhood out there to support the eight competitors.

It was a fun day to say the least. Every brother had a great time competing for a good cause. We finished first in the three legged race, second in the egg toss, we won our tug a war competition, finished second in the joke contest and had the fastest time in the elephant march. It was safe to say the boys in sapphire blue and old gold had a solid day on tower lawn. Tonights event is the big dance and hopefully the bros routine is flawless and will bring home the the trophy.