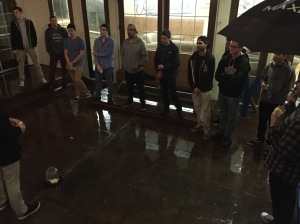 Last Saturday instead of going out, the brothers of Delta Upsilon had their first weekend brotherhood event. We can thank our President Jim Rollison for the wonderful idea he brought to the house. He recently just met with international and majority of the talk was based on brotherhood bonding. He came up with this great idea of partaking in a fireside chat. We had roughly 50 bros come out for this awesome brotherhood event (even though few are pictured).

The event was about saying something you like about the chapter and then something you think the chapter can improve on. Then after you present it to the brothers, you lite the note on fire and place it in the jar with the other notes. The majority of the brothers said participation was something the whole chapter needed to work on. Things like accountability, trust, and respect were the main things the bros really liked about the house.